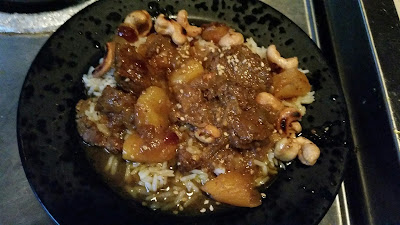 I’m not a person who embraces the latest kitchen gadgets. Don’t get me wrong, I enjoy things that are fun and make my life easier but, maybe it was growing up, I don’t remember my folks having a lot of gadgets. They used a cast iron skillet, an electric frying pan, a set of Revere Ware pots and sundry other pots and pans, some of the baking pans had dark stains from years of use. It was the era of Corelle® so we had a casserole or two. And, of course, Tupperware®, remember burping the lids, and those Tupperware® parties? Ah, the social life of the Middle Class in the 1950’s. There was the ubiquitous potato peeler and hand cranked can opener and remember those triangular coiled egg whisks? Our pancake turner handle was red and white and was a bit chipped from years of use. My folks both cooked but didn’t bake a lot so we just had a hand-held electric mixer. Their go-to desserts were pies, with huckleberry being the gold standard. The large kitchen knife had a natural well-used wood handle and was kept sharp by my Dad, something he’d learned to do growing up on a farm.

Over the years with my enjoyment of attending estate sales here and there and a husband who loved to cook, we’ve accumulated a gadget or two. I figured that for the price you would pay at an estate sale, if we didn’t like/use it we could donate it. I keep myself stocked with a Krupp’s coffee grinders to use for spices in the Indian dishes I make, you often see them.  I tried a meat slicer but it turned out not used much and was donated. We’ve tried a couple mandolin type devices and liked one more than the other. I snagged a full sized Cuisinart Food Processor that amazingly, for the $8 I spent for it, has worked perfectly for years. A special friend bought me a Cuisinart Epica system perfect for smaller blending jobs like an onion or some whip cream. I found a smaller sized rice cooker that, surprisingly we used and enjoyed, especially after I discovered the tasty idea of cooking rice in coconut water.  After a discussion with a friend about my frustration with the cheapness of most coated electric frying pans, she suggested a stainless steel Faberware that she had used when cooking on a fishing boat in Alaska. She ultimately gifted me with one she had snagged at a second hand shop. I’ve loved using it from everything from soup to nuts (yeah, I do toast a nut or two sometimes).

I’ve never been too happy with the boat’s electric oven, the heat was flaky. I treated myself to a Frigidaire® Toaster oven that was also a convection oven and love it so much that when the first one went out, I bought another just like it, this time with an extended warrantee. To try to get myself to drink more water I took the advice of a gal in my boating organization and bought a Soda Stream seltzer water machine. We like the seltzer water, and I do drink more, we’re not so fond of the flavorings you can use, although the lemonade is good.  And I’ve been inspired by my friend who loves to cook to use my crockpot regularly, often once a week. In fact, at a yard sale recently, I bought a smaller one to see which one I might use more.


Finally I have to talk about the very large Mirro® pressure cooker I own and have lugged around since 1972. Yeah, the ancient era of the Whole Earth Catalog and whole food cooking, alternative radio stations and the emergence of aerobics. Newly married (my starter husband as a friend puts it) and a poor cook, I guess I had an inspiration that it might get me started on cooking as an adventure. It didn’t, but I did learn to make Mostaccioli, from a friend who grew up in large Italian family. It is kind of spaghetti sauce with penne noodles and cottage cheese. The addition of the cottage cheese in the meat sauce seemed exotic to me at the time. Mom had never thought of doing that. Anyway, I’ve used that pressure cooker over the years, maybe twice a year or so and was never afraid of it exploding. A while back we made a beef stew in it with my husband’s secret ingredient as part of the sauce, Bloody Mary Mix. The pressure cooking truly does infuse the flavor into the ingredients more intensely than even slow cooking.

This brings me to the Instant Pot®, the latest addition to our kitchen gadgets. It’s been a ‘hot’ item for about a year, I guess. You hear about it all over the Internet and in a conversation here and there. Even though I was familiar with pressure cooking, I paid only limited attention. All the hype about sauté’, pressure cook, slow cook, etc. all in one seemed a bit too good to be true.  Then one day in an online newsletter I receive, www.frugallivingnw.com, I noticed that the normally $115. Instant Pot® could be had for about $53 at Fred Meyer with their discount and some coupons. At that price, I thought, I wouldn’t feel so guilty if I didn’t really take to it. And, if I liked it, it was ideal for the boat because I could get rid of my slow cookers, and rice cooker and depend less on my electric frying pan for sautéing, saving dishes to wash.

I’m in love! I have, truthfully, used it every day since I’ve had it. I’ve made Frittatas for breakfasts from left over ingredients like creamed spinach, portabellas, ham, cheddar, tomatoes, a shallot, Cavander’s brand Greek Seasoning Salt…sooo tasty and healthier, no frying. I’ve made Moroccan Lamb Tagine (a recipe inspired by the cookbook that came with the pot). It had an amazing taste from ingredients like ginger, cinnamon, turmeric, cumin and garlic rubbed with olive oil into the meat, then the added beef broth, onions and honey and dried apricots all infused through the pressure cooking into the lamb. It took about half an hour to cook. Then I cooked rice in the pot for 4 minutes. Lamb Tagine under an hour, Cool!

I’ve made beef stew, spaghetti and meat sauce and improvised a creamed spinach chicken and pasta dish. Browning some chopped onion on the sauté’ function, I then seasoned and browned two chicken thighs. I nuked frozen spinach to defrost then squeezed out the moisture in a colander. Took out a metal bowl that fits inside the Instant Pot®, stirred together the spinach, onion and some whipped chive cream cheese and sour cream (the original recipe called for Alfredo sauce). I poured chicken broth into the pot and deglazed it from the chicken frying. Then I dumped dry spiral pasta (it’s what I had) in the Instant Pot®. The thighs went on top of the pasta then the metal bowl with the spinach onion sauce went on top of the chicken pieces. Lid on, after the pressure built up I set it the pressure cooking function for 4 minutes. I let it cool down for 4 minutes releasing the last of pressure. The pasta cooked in broth topped with creamed spinach sauce and cut up thigh meat, I even impressed myself.  And Goodwill is going to receive my slow cookers and rice cooker.

Amazing sauce and the lamb and fruit melt in your mouth.

Instructions:
Mix the ground cinnamon, turmeric, cumin, ginger and garlic with 1 tablespoon of around a tablespoon of olive oil to make a paste, coat the meat with this paste and set aside. Slice the onion into rings and set aside.
When ready to prepare dish, turn Instant Pot® on sauté. When it reads “hot” add a Tablespoon or so of olive oil and sauté the onions until they are soft. Remove the onions and add the lamb browning on all sides. Add the vegetable broth and deglaze the pan, scraping the bottom to get all the bits. Add the onion and a cinnamon stick.
Lock the Instant Pot lid and press Manual setting and set time for 25 minutes. (Follow directions from the manual).
When done use the Natural Release pressing cancel and waiting for the heat and steam to come down on their own, mine took about 10 minutes, check your manual for guidance.

Add rinsed and drained fruit, honey or syrup and with the pot on sauté, reduce the liquid simmering everything together for about 5 minutes.
The sauce is so delicious that you need to serve it over rice.

(If no Instant Pot®, saute the onions and meat then place it with the broth in a baking pan and bake when nearly done saute it with the fruit and honey or syrup reducing the sauce.)

Wipe out the Instant Pot® insert. Put 1 cup rice and 1 cup water with a pinch of salt into the Instant Pot. Lock the lid and set on Rice function. After it heats up (the time starts) cook for 4 minutes (the manual gives rice/water amounts/time). Reduce steam using the Quick Release method, see manual.
Posted by Foodies Over 50 at 12:34 PM No comments: